FGM Architects celebrated its 75th Anniversary and hired yours truly to serve as emcee and DJ for the evening.  The party took place in President’s Hall at the Union League Club – 65 W. Jackson.  Legend has it that President Ulysses S. Grant used to get his drink on alongside club members – the original mission statement was to create an organization to “support President Lincoln’s Union.  Famous members of the past included architect Daniel Burnham, Marshall Field and guy who apparently has a street named after him, John H. Kedzie.

The current building dates back to the 1920’s.  My former stepdad was a member, so I’ve spent a fair amount of time at the club.  My friends Ryan and Michelle held their wedding reception at the Union League Club – and from what I remember – it was a fantastic party.  Another time, I brought my buddy Danny to see his hero, Bobby Knight, speak at a luncheon.  We walked up to get his book signed afterwards and Dan could struggled to summon the courage to engage the Hoosier legend.  Knight had an autograph system.  The seeker told a handler how he or she wanted the book personalized, and a Post-it note was attached inside the cover for Bobby to work off.  He didn’t look up from his Hancockian work unless he was prompted by the fan.  The General is intimidating.  Ask Neil Reed.  Knight was nearly finished inscribing an inspiring note to his lifelong fan (It read: TO DAN – Bob Knight) when Danny found an icebreaker.  “Hey Coach, I wrote the book report I ever wrote about you,” he blurted out.  Knight looked up from the book.  “Subject or author?” he inquired.  “Both,” Dan smiled.  That was the entire interaction.  But Danny had his moment with an idol.  Pleased with himself,  Danny went to the bar and proceeded to slam several Coca-Colas – like Forrest Gump with Dr. Peppers at the White House.

When FGM approached me to handle duties for the event, I was slightly intimidated.  I’m comfortable on the mic and solid enough on the turntables.  But the size of this room was a new challenge.  I feared I might need more oomph than my two power speakers – loud as they are – could provide.  My co-worker Dag turned me on to his sound guy and it was a Godsend.  Not only added two large speakers and a subwoofer to my set-up, but an expert named Mark delivered the equipment and set it all up.  A true pro, Mark made sure everything was optimal and helped me soundcheck.  It allowed me to concentrate on the presentation aspect of my gig and set my mind at ease regarding the technical stuff.

I began the night with some announcements and welcomed the FGM bosses up for a speech.  Played some light jazz during dinner then shifted elegantly into party mode after entrees.  Dance floor got cooking eventually and I tried to honor every request I could muster.  There was a large contingent from St. Louis who insisted I find “Gloria” – the Blues’ Stanley Cup Champion theme.  I downloaded it and made it happen – and didn’t catch any grief from Blackhawks fans.  Everyone seemed to enjoy themselves.  My contact at FGM gave me very positive reviews.  Was really cool to MC and DJ a classy affair at Union League.  I think even Ulysses S. Grant would’ve participated in the Cha Cha Slide. 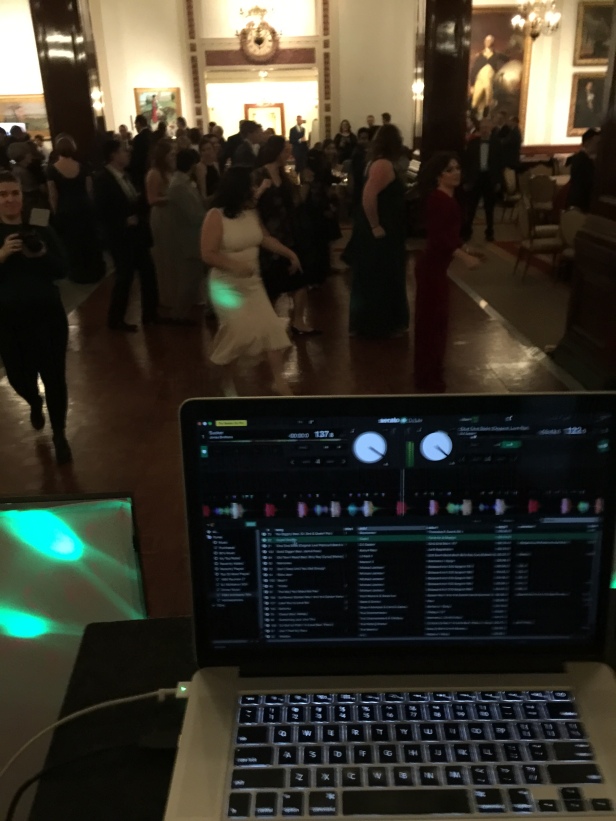