40 years ago my boss, Steve Dahl, fronted the most successful radio promotion in history.  Rockers chanted “Disco Sucks” and stormed the field as part of an epic party at old Comiskey Park.  Here’s a chuckle-worthy remembrance from a participant on that wild night – the late, great Chicago actor Michael Clarke Duncan:

The White Sox forfeited the 2nd game of a doubleheader against the Tigers because the field was in bad shape.  Sparky Anderson was pissed, Harry Caray was amused and the Sodfather got to work on repairs. The rest is history.

Thursday night the organization welcomed Steve back to throw out the 1st pitch before the game:

IMG_0345 from Brendan Greeley on Vimeo.

Ryan Burr called it a strike.  The Sox gave us a luxury box to enjoy the game with the crew and strong contingent of the Dahl family:

Fridge full of Bud & Bud Light plus dogs, beef & wings.  I went all in on a couple dogs as soon as I rolled up.

We brought a couple sections of listeners out to the game with us and many got the free anniversary T-shirt giveaway.  We wandered down the ramp to hang out around the 5th inning. Grabbed a quick ramp photo, with skyline (picture credit: Matt Dahl) 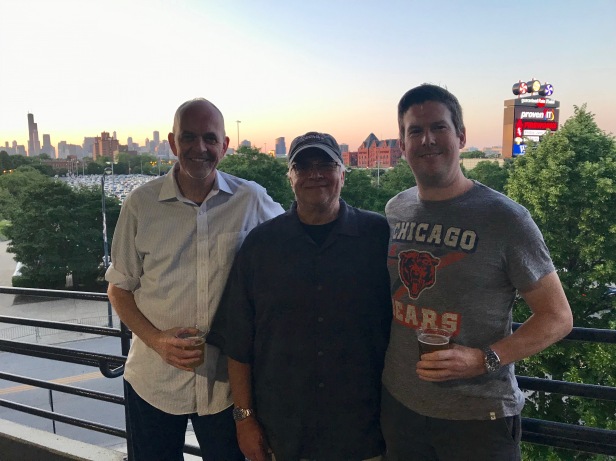 I look taller than Dag, thanks to ramp positioning.  The outfield at the Rate is always fun and the Sox started scoring the moment we arrived.

Terrific Tim Anderson blasted a homer to left center and the place went up for grabs.  Leury Garcia hammered another to one of our sections (102) to claim the lead from the Yankees.  Fireworks:

Sox are now just 1 game under .500 with a solid win over a tremendous New York team.  Perfect mid-60s night for baseball, awesome game and incredible event for Steve, the extended Dahl family plus Sox and podcast fans alike.  Nothing beats fun at the ever-improving and renovating ballpark on 35th.

Then I hopped on the Red Line to head back home.

A couple Yankees fans were listening to the last 45 seconds of Game 6 as the Raptors captured their first NBA championship.  They graciously shared the audio with me the train rolled north and we gasped at each twist and bounce of the ball.  Eventful sports night.  I’m sure to remember this one, even though I didn’t score a T-shirt.  I’m sure Steve can hook me up with an extra.

You can listen to the recap here, although it isn’t a free show.  Gotta be a subscriber!