My cousin Conor and his fiancé Annie love their 1-year old pup Toby enough to throw him a little party at their local dog-friendly tavern, River Shannon. That bar has long been a favorite of mine and many others. My ex-girlfriend and I even spotted Gary Sinise bellied up there once, which – as CSI New York viewers at the time – we found hilarious and appropriate. Giant Jenga is the bar game du jour and they pour a quality Guinness.

The Iowa/Michigan Big Ten tourney game was on the projection screen when I got there, but a large group of Milwaukeeans closer to the screen got it switched to the Golden Eagles matchup with Seton Hall. Conor bet on UNC/Duke and secured the TV closest to the door. One other behind the bar television was broken or disconnected from the dish or cable. The 2 remaining screens both had Kansas on. I asked to switch one to the Big Ten, but a Jayhawks fan informed me they needed both due to a hanging plant blocking the view of one guy. He had to watch the other TV. They were cool about it and we asked the bartender if he could remove the hanging shamrock plant. Unfortunately, he didn’t have authorization from bar ownership to alter the decor. The KU guys started to rearrange, but I told ’em not to sweat it. They were good dudes and were paying more attention than I was anyhow. I was here for Toby’s party. Besides, Iowa didn’t look too hot outta the box so I didn’t want to insist they change a TV just for me, only for it to turn into a blowout I don’t wanna watch through to the end. And it was Kansas, not Arizona or something – there’s tons of KU grads in Chicago who’ve earned the right to watch their team. Conor ordered pizzas from Happy Camper, which held up nicely via delivery. Toby got his dog cake and lots of pets. And we all had a great, fairly tame night. After all, we needed to save energy for St. Paddy’s weekend. 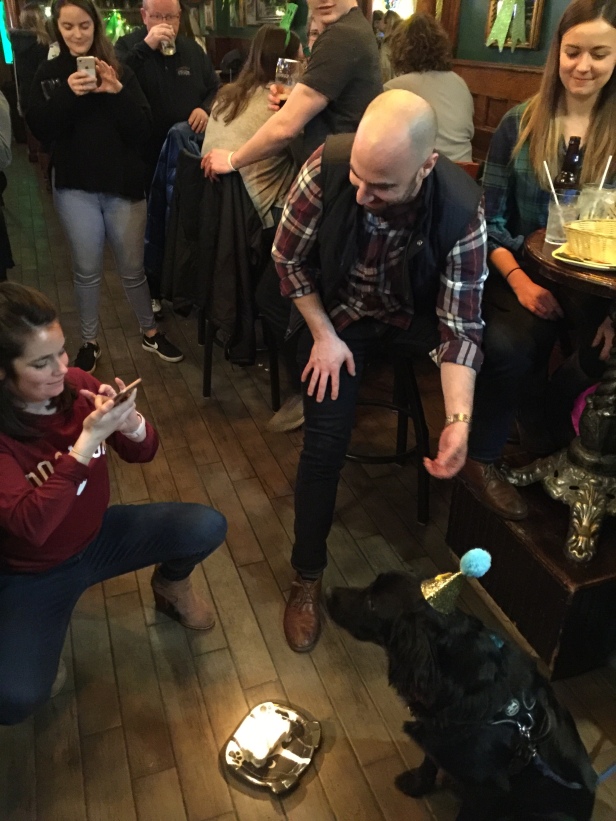