It wasn’t exactly an movie-style business raid.  City inspectors showed up to R. Kelly’s studio at 219 N. Justine today around noon.  Presumably scoping out building violations.  Seems like random reasoning to suddenly be investigating the singer.  Guessing they didn’t gather much incriminating evidence of the salacious nature because the inspection has been public knowledge since Friday and dudes were filmed removing stuff last night.  Probably saving beats and tracks.  The Chicago R&B star is under heavy scrutiny ever since Lifetime aired Surviving R. Kelly earlier this month and the world learned what many Chicagoans already pretty much knew.  Dude is creepy.  I was at his trial 11 years ago, reporting for CBS radio everyday.  I’ll share more about that in the future here at greesechicago.com.

Today, it was a big crew of officials who swept in to the studio, then left in a caravan of SUVs.  Nothing much to be learned by standing out on the street watching, but I’ve got some time on my hands in the afternoon.

Here’s the camera’s grouped outside the entrance, hoping someone – anyone – would emerge and give them a quote.  Nobody did.

If you’re a reporter/cameraman in the struggling local news game, you gotta come back with something.  Hence interviews with passersby and gawkers.  This guy told everyone he never suspected anything negative about R. Kelly.  You’ll see him on every channel tonight. 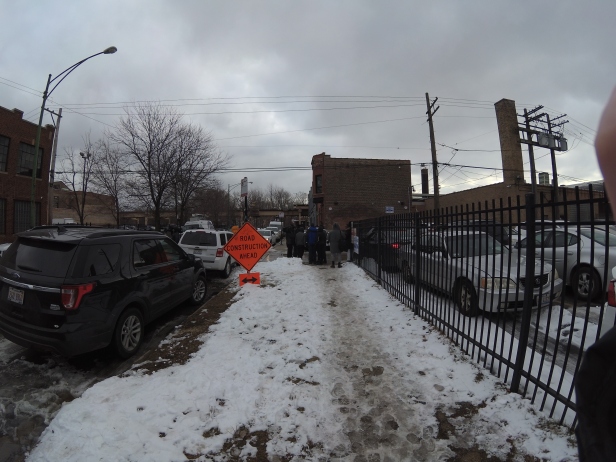 Then, as quickly as nothing happened, nothing was over. 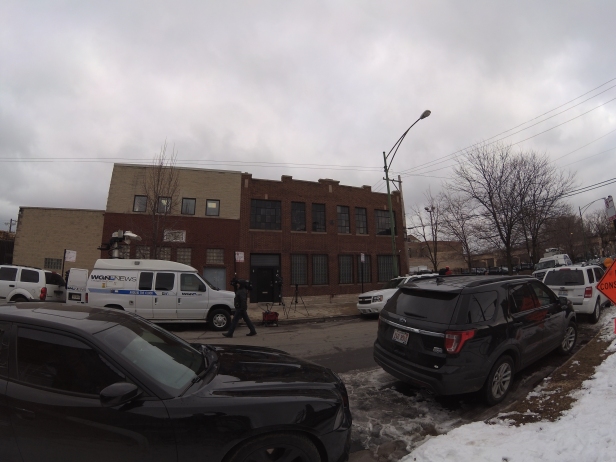 But the story goes on.  The heat isn’t off R. and won’t be maybe ever again.  He’ll be making headlines for months, at least. And it’s not a case of the old adage ‘no press is bad press’.  It’ll be a continued downward spiral.  We’ll stayed tuned and find out his fate.