South Bend was the ideal place to say farewell to 2018 and ring in 2019.  I picked up my Boston cousin Pat & his wife Erica and my sister Meg on NYE and we got on the road around 2.  Hit a little traffic leaving the city and the navigator (Meg) fell asleep, literally.  I know, I should know the route by now, but I drive it just infrequently enough that I forget.  Ended up taking 94 all the way to Rte 20 in Indiana, but at least we didn’t take this turn onto Fail Rd.

Arrived at 5 eastern time to the house my Uncle Chris secured for us (friend of his who has place walking distance from Notre Dame Stadium).  The Compton Family Ice Arena is even closer – and Chris left us tickets to the Notre Dame/Boston College December 31st college hockey game.  Meg brought a giant purse so security stopped her from entering.  She was gonna have to Uber back and forth to drop it off.  The kid who we’d just given a free extra ticket to outside overheard the exchange and offered to let her store the purse in his car.  She paused, because he was a stranger and all.  The kid sensed the hesitation and alleviated any worry when he said “It’s okay, I’m Canadian.”  Appeased by his You Betcha accountability, we sent Meg to his car to trunk the purse til after the game.

Compton is a state-of-the-art arena with a ridiculously cool VIP section upstairs that’s actually an Irish Bar with a tremendous view of the ice: 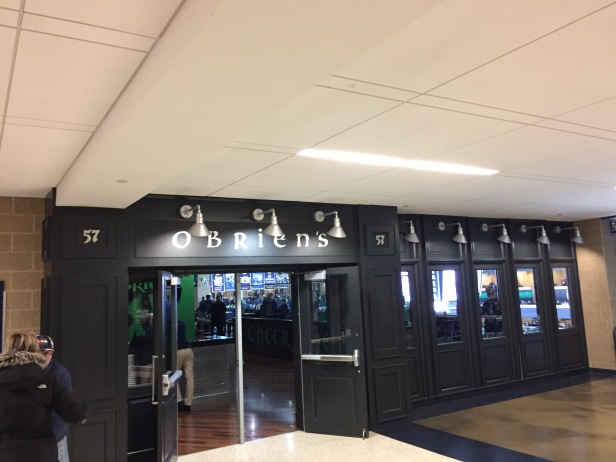 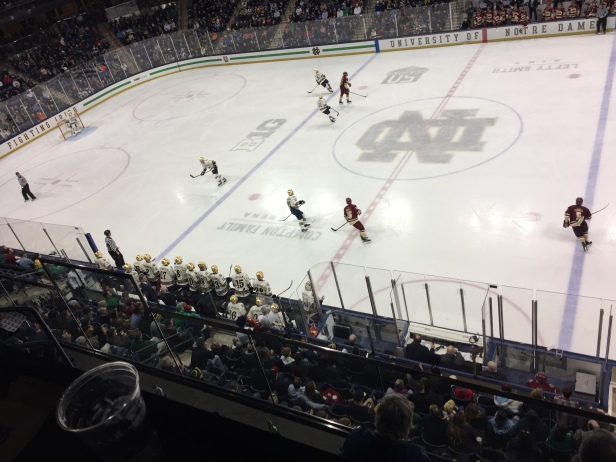 It’s also the only place in the arena you can drink, so Pat & I  knocked back a couple of Yuenglings.  The Irish pitched a shutout so I made sure to send this video to my cousin Sean, a BC alum:

After the game, we met Erica’s friends downtown South Bend.  Familiar with Brothers’ menu from Iowa City and Madison, I ordered up a curd burger.  Hit me perfectly and set a nice NYE base. 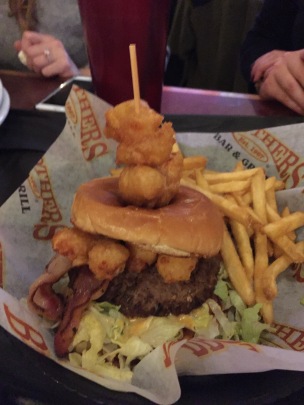 A family at the table behind me hesitated to lend me their ketchup because I was sitting with all Bruins fans.  I convinced ’em of my Chicago roots and they relinquished the squeeze bottle.  Around 10:30 we made the move from the sports bar to a more South Bend-traditional establishment, Mulligan’s.  It’s where we spend most our family time after Irish football games…so it only seemed right to be there at midnight.  Plus, the prices can’t be beat. Heck, they were selling mini-bottles of champagne for $3.  My ketchup family from Brothers even showed up.  I handed ’em a couple of our extra mini bottles of bubbly as the clock wound down and the patriarch of the family bought me a shot.

This dude won the (Suge) night with his look: Death Row Records accountant from 1995.

About 45 minutes prior to midnight, I saw a guy wearing a Summit Ice coat and started a conversation about “Nathan For You”.  He was so elated that I commented on his jacket and knew the Nathan Fielder reference.  “My wife got it for me for Christmas and I’ve been wearing it for a week.  You’re the first one to notice.”  I ended 2018 with a good deed.

Erica secured a bunch of pizzas from the Domino’s next door around 1am and we stuffed our faces.  Never a good idea to eat that much Domino’s.  But you take what you can get.

New Year’s Day we were out the door just after 9am to get to the tailgate.  Like a champion, Chris arose at 5:15am to secure the first spot in the lot for us.  The hockey crowd tailgate was a little different from a typical Irish tailgate, but not in a bad way.  Less rowdy, probably, because the students are all gone on winter break.  Made pals with the Bruins fans next to us who grilled up some beautiful brats as we kept warm up by passing the handle of Fireball.

Man, I haven’t even gotten into the game yet.

Once in a lifetime experience seeing a hockey rink plunked down into Notre Dame Stadium.  The flyover, Jim Cornelison’s anthem, the Irish tradition – overwhelming.

After the 1st period, Weezer was introduced and started out with their recent hit Toto cover.  Then they did a song I didn’t know.  Finally, they closed with one of my favorites – a classic from the Blue Album:

After Weezer, I wandered out of Notre Dame Stadium and back to the house to try and watch the Hawkeyes in the Outback Bowl.  Sorry, I’m a lukewarm NHL fan and I saw what I came to see.  Plus, I needed to cool down my alcohol consumption for a bit and eat the sloppy joes in the fridge.  Then a nap.  Then I met the crew postgame at Mulligan’s.

Owner Pat Mulligan is internet famous for his “Rhino” trick.  He suctions a 24-oz can of beer to his head and it sticks.  He pours it into a cup nonchalantly or into open mouths of fans.

My cousin knows him so we get inside knowledge about the trick.  “The Rhino” tells us he’s able to do it because his head is fat.  He mashes folds of forehead fat into the bottom curve of the can.  The Rhino admits his head is raw from all the performance requests since he went viral.  But the show must go on.

A+ start to the New Year.  Thanks, South Bend.