Lottie’s called last call while Game 3 rolled on last night.  The place was packed with mostly Halloween revelers.  I met my cousin Conor and his fiance Annie – both from Boston – up there around the 11th inning.  Puig’s infield hit/Kinsler’s error in the 13th extended the action and prompted Conor to order another round of Jamo.  Knowing Estelle’s isn’t ideal for baseball action, I hustled the handful of blocks home to catch the remainder of the game and Muncy’s magic.  A game for the ages, as announcers would say.  Suddenly, it’s a series again. 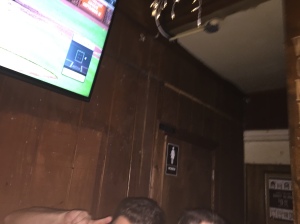